by mopar_country
Alright here we go. I had to sell my 2000 neon with full srt4 swap this past summer. Put alot of work into it over the spring, Full mopar lip kit and full R/T leather interior and swapped over power doors, locks and windows. Paint, wheels, tires, headlights, taillights, stereo, etc etc.

95 base. SOHC 5spd, no options....lowest on the totem pole neon.. BUT! A perfect bare platform to start with.

I had the magnum topend and some other stuff off the R/T parts car I had sitting in the shed....PERFECT! now i have a use for it!

So i started removing some crap off the car. Terrible non functioning tach that was screwed to the dash!! WTF!! I liked the 2 tone dash on the early models but this one is destroyed.

So I managed to pick up a whole upper dash section with the vents and the drivers piece as well. Only thing is they are Agate but oh well.

When I was driving out to pick up some parts, I drove past a shop and seen this sitting there neglected!

95 sport coupe. I had a quick look over the car, body is too rusted to restore it. But what a perfect donor car! Rear disc brakes, rear swaybar, sport seats! 3.94 w/.81, 5 lug hubs, early sport wheels! Roof Racks!!! Perfect! Just the look Im going for. Managed to pick the car up for 200 bucks.

So now I have more neon parts coming out of my backside than ever before. A friend got out of neons and gave me a bunch of left over parts he had that he was going to throw out.

So stripping the donor car wont happen until spring. I hate working outside in the cold and im not much of a fan of snow. But whatever small things that can be done inside the house is what I have been picking at.

Heres some pictures of a pair of left over headlights I had. Restored them lastnight and painted the turn signals. Also I am working on a custom grill for the car.

not bad for painting them with a brush

And heres the grill

by Ianguilly
Holy shit that tan interior is super rare!! And that red base car is bad ass, good Luck with the project.
by Echoalpha23
HOLY SHIT! why cant i find something like that just driving around?!?
by BaLLisTiK
My car had Tan interior as well.
by metal_gear_jon
I stared at a driftwood interior for 4 years in the sport. You see a lot of them in Emerald green pearl cars though.

You might say that thing is rusty, but the hood and the decklid look a lot better than mine was before it got sold. Overall looks clean other than the dent ,the dogleg rust, spot by the tail. But you only know what lurks beneath

Btw, the white car is super nice, bet your sorry to see it leave.
by mopar_country
I hated having to sell the car but it went to a good home. The guy who bought it absolutely loves it. I still keep in touch with him. He plans on painting it black and redoing the suspension this year.

Accually the floor on the parts car is mint, its mostly the dog legs, deck lid and hood that are rotten. Rockers are starting to get ripe BUT! i really dont like doing any type of body repairs. Its too far gone for me, It can be fixed but I dont have the proper place for that. Theres alot of other things on the car that need alot of attention and or replacement. So financially and labour wise I dont feel its worth it.

The tan interior is going up forsale in the spring. Everything except the front sport seats.

Thanks for postin guys! there will be alot more to come.

Matt
by Ladi3sman55
i didnt think the driftwood interior was rare. i believe its the chocolate interior that is rare iirc
by Ianguilly
I think the dorito seats are the more rare part, first time i've ever seen them in driftwood.
by Ladi3sman55
first time ive seen em too.
by mopar_country
Hey guys. Have been picking at a few things lately. Messing around with a spare shifter to turn it into a short throw, kinda based off a maddog but not as aggressive.

Also decided to make solid shifter bushings for it and the cables. I have one finished and installed, the other one next to it for the other side, I just have to finish smoothing it out so it fits better and looks half decent.

Next is a custom C.A.I. I wanna retain a stock/clean look under the hood. As well as leaving the stock battery location. Plans for this are being thought about, trying to figure out the best route.

Matt
by srt4eh
for cai I'd suggest a 3.0 intake or iceman style intake....looks clean if done right and keeps the battery in the stock location
by mopar_country
I had a 3.0L intake on my old coupe. Loved the performance of it but didnt really like the loook of it. And an Iceman intake is hard to find around here. Iceman looks nice tho!
by srt4eh
get a no90 intake manifold and then it'll be a little easier to make look clean

by mopar_country
While im planning and fabricating the short throw I decided to paint the letters and "stitching" on the shift knob. Next will be the boot stitching as well.

Heres the numbers and pattern on the knob. I have to put another coat on it as the black is bleeding through the red on the numbers.

Matt.
by mopar_country
Alright, had some more time tonight so I cleaned up the shift boot and painted the simulated stitching in it as well. Heres a couple of pictures of the knob and boot together. 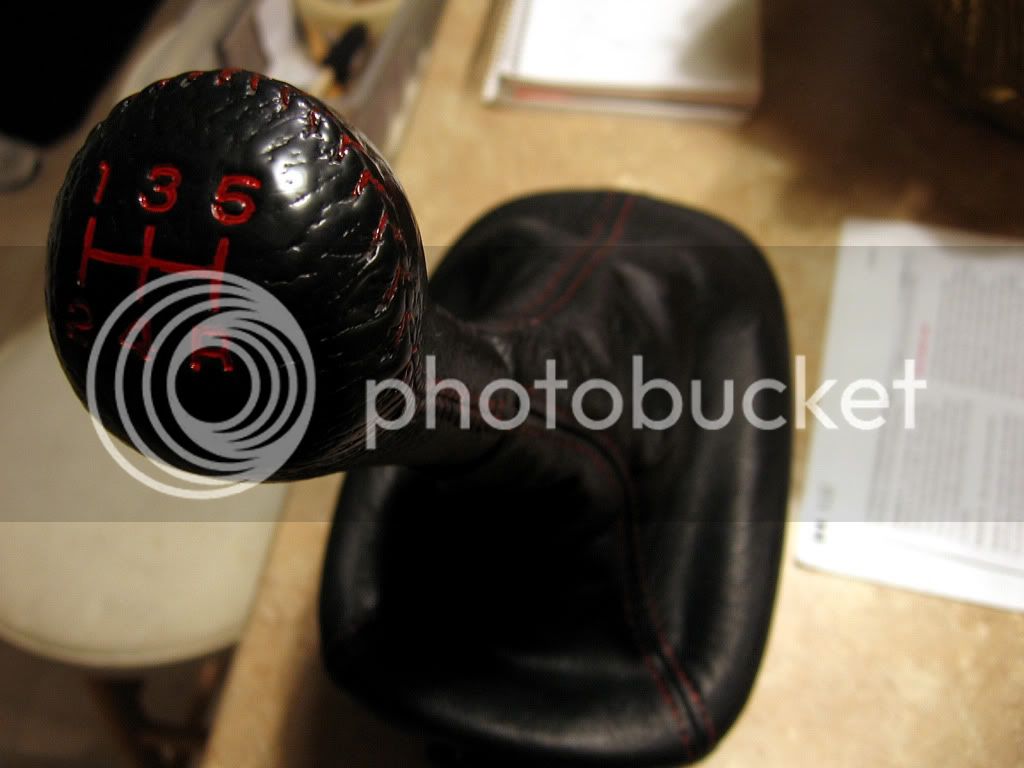